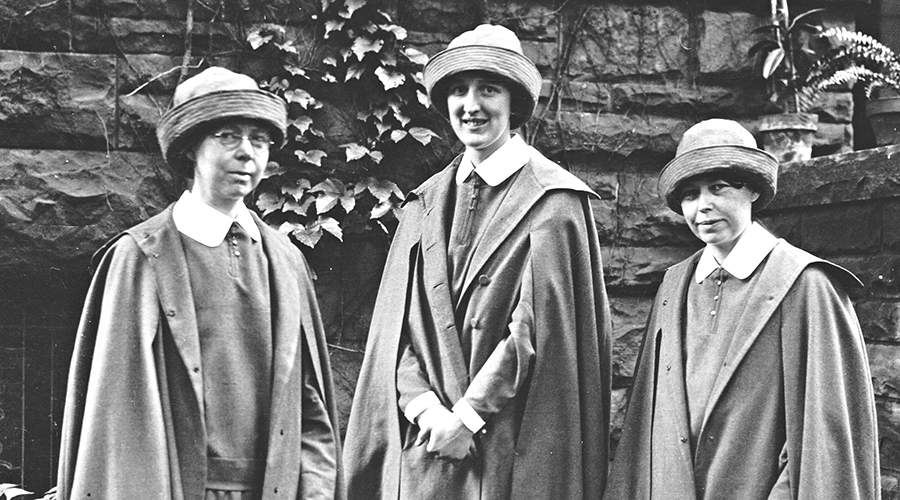 Sisters Catherine Wymbs, Margaret Guest and Catherine Donnelly in Toronto before they left for the first Western Canadian mission at Camp Morton, August 1924. (SOSA 9-04.1-1-14, The Field at Home-October 1924)

Entirely Canadian in origin and roots, the Sisters of Service were founded in Toronto on August 15, 1922 in response to the influx of immigration.

During the early part of 20th century, the federal government opened prairie lands to immigrants of Central and Eastern Europe. More than one million homesteaders took advantage of the almost free land grants in Western Canada. Settled in these rural areas, the homesteaders struggled in the isolated rural areas without the benefits of the Catholic Church and religious instruction.

The idea of the Sisters of Service originated with Catherine Donnelly as a result of her experiences as a teacher in rural Alberta at the end of the First World War. To Rev. Arthur Coughlan, Provincial Superior of the English-speaking Redemptorists in Canada, she described the spiritual and educational needs of the rural areas in Western Canada and concluded that no present religious community in the West was suitable.

Catherine Donnelly and Father Coughlan sought the support of a new women’s religious community from Toronto Archbishop Neil McNeil, who had been critical of the Canadian Church’s insufficient effort towards newly-arrived immigrants. As ecclesiastical superior in Toronto, the archbishop asked the Sisters of St. Joseph of Toronto, the largest women’s congregation in the archdiocese, to guide the early formation and administration of the community until 1928. On June 21, 1925, he canonically erected the Institute of the Sisters of Service, describing the founding of the institute as “a very important step towards a solution of the problem of immigration, safeguarding the faith with social and civic betterment.”

The early development of the Sisters of Service lay in the hands of Rev. George Daly, C.Ss.R. A Redemptorist and author of Catholic Problems in Western Canada (1920) following a three-year appointment in Regina, Father Daly was assigned by Father Coughlan in January 1922 to raise funds and find candidates for the fledgling community. For the next 34 years until his death in 1956, Father Daly guided the spiritual life of the community, oversaw its financial matters and the founding of the missions.