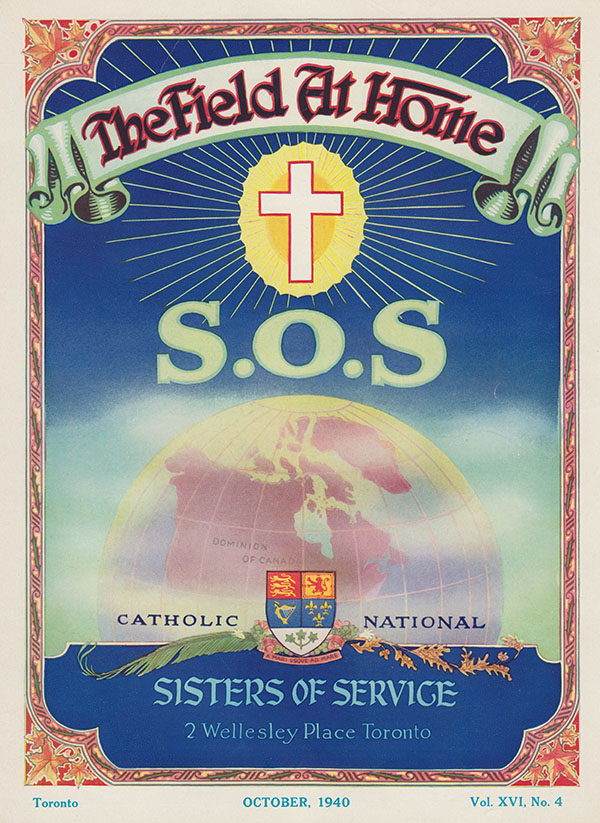 Cover of the October 1940 issue of The Field at Home.

Click here to read issues of The Field at Home

The Field at Home

The Field at Home was the brainchild of Rev. George Daly, C.Ss.R., director of the Sisters of Service for 34 years. Two years after the founding of the community, the first issue was published in October 1924 to inform the benefactors about the work and progress of the Sisters and to solicit funds.

For the initial eight years, Father Daly wrote and oversaw the production of the quarterly magazine. As an author of three books and numerous articles, Fr. Daly’s publishing knowledge of the power of words and illustrations shone throughout the issues. The first issues of cream-coloured seven pages reflected the community’s classic simplicity with a cover of a black ink adaptation of its coat of arms.

Replacing Fr. Daly as editor, Sister Carolyn Albury assumed the responsibility for the next 20 years, continuing his five main sections: The Editorial, written by Father Daly until his death in 1956; At Headquarters; In the Mission Field; Our Benefactors and Vocations. The four successive Sister editors brought their experience and journalistic training to the magazine, which returned to the original size in 1955. The later issues reflected the contemporary and changing religious trends and celebrating the historic moments within the SOS and Canada.

To attract interest and support, The Field at Home originally was complimentary. Copies were distributed to churches and placed in pews. Several Sisters were attracted to the communithy after reading the magazine. Later a yearly subscrption cost $1 a year and only increased to $2. At its peak in the mid-1960s, the subscription list rose to 4,300. The publication of the magazine ended in 1984.